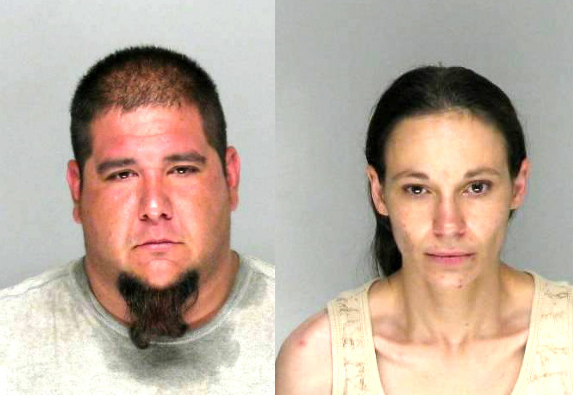 The parents of an Augusta toddler were arrested Sunday after their 2-year-old daughter was found living in filthy conditions at the Parkway Inn, a sheriff’s report says.

The conditions were so bad that the child had bumps and rashes on her arms and legs, a report says.

Barret Brown, 29 (left), and Carolyn Jackson, 29 (right), were each charged with deprivation of a minor after the living conditions at the Washington Road hotel were revealed.

From the officer’s report: “There was food on the floor and in the sink along with empty food boxes, clothes and trash thrown around the room and on the bed. I then took another look at (the child) and her entire body had some type of sores, bed bug bites, or scabies.”

The deputy called for an ambulance and paramedics determined the girl needed to be sent to the hospital “due to the severity of her condition,” a report says.

The 29-year-old mother was first brought to deputy’s attention as she was sitting at the Circle K near the hotel. She was yelling into a cell phone, telling the child’s father “come get your daughter before I do something.” She said she didn’t want to be in the hotel anymore.

The child’s father told authorities that he told his girlfriend to seek treatment for their daughter but she didn’t. Both parents were arrested in the case.

After the child’s release from the hospital, she was turned over to her aunt with authority from the Department of Family and Children Services.