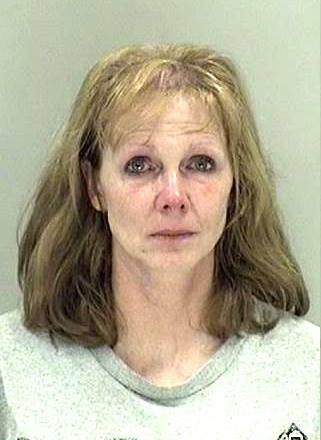 An Waynesboro officer who was charged with DUI last month after hitting a stop sign in Hephzibah had been in a wreck just two hours before and was not arrested, according to documents obtained by The Jail Report.

If you recall, Kimberly Marie Sanders was charged Sept. 16 with DUI after striking a curb and hitting a stop sign at about 3 p.m. that day outside IGA on Highway 88, authorities said.

But that was her second wreck in Hephzibah, according to Chief Dwayne Flowers.

In the first wreck at 1:30 p.m. Sept. 16, Sanders allegedly ran a red light at Highway 88 and struck a vehicle driven by Terry Moore who was proceeding through a green light at Windsor Spring Road. Sanders was cited for disregarding a traffic control device (red light) and released.

Why didn’t the Hephzibah Police mention the earlier wreck when the officer’s DUI made news last month?

Here is a statement from Chief Flowers: “The main reason is that it was two separate incidents two hours apart, and second reason is that all request for information was specifically addressing the DUI accident and arrest. In the first wreck with Mr. Moore on September 16, 2014 we saw NO obvious signs of impairment displayed by Mrs. Sanders.  The 2nd wreck that day we did and acted accordingly.”

Less than two hours after the first wreck, Sanders hit the stop sign and then kept going down the highway, police said. That’s when someone reported her erratic driving and she was stopped nearby.

Sanders, 46, of Blythe,  passed a Breathalyzer test but failed a field sobriety test given by Chief Flowers. The chief requested a blood sample and Sanders provided one at the scene.

“We determined she was impaired. It was not alcohol,” he said at the time, adding that Sanders didn’t admit taking anything to impair her driving. She said she was headed to a doctor’s appointment.